Are Your Kids (and you) Ready to Swim this Summer? 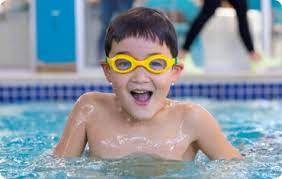 It’s summer time, which means that it’s time to hit the pool, beach, lake, river, or whatever other body of water you can think of and go for a swim. But, I have a weird question. Have you set yourself and your kiddos up for success with your activity throughout the year? Many of you might be thinking, “Set myself up for success? It’s recreational swimming, what is there to prepare for?” This question is perfectly reasonable, as recreational swimming does not seem to require any great amount of physical preparedness, beyond getting in the water and starting to paddle. Here at OPEX Franklin, however, we believe in making those simple activities even more fun, and we do that by preparing your body to live a fuller life, which can start in the gym.

Hang in there with us for a moment, as coach nerd-out talk is coming: In coach-speak terms, swimming can be categorized as a “cyclical, absolute speed” movement, or more simply a repetitive motion performed under low resistance. To ensure a person can withstand this repetitive motion it is best practice to ensure they are strong and efficient in all the associated motor patterns that come together to create the cyclical movement. For swimming, specifically, this means being efficient and strong in vertical pressing patterns, vertical upper body pulling patterns, single leg patterns, and most importantly core based movement patterns. So, what does this actually look like inside of the gym?

Whew! You survived the nerd talk! Now what does this mean in real life for you and your kids?

A simple movement prescription to ensure safe and efficient movement patterns during a swimming stroke, could look like following: Single Arm Dumbbell Overhead Carry, Single Arm Cable Lat Pulldown, Single Leg Glute Bridge, and Flutter Kicks. But the what isn’t nearly important as the why, so why these movements, and how do they translate to swimming?

Let’s start by taking a look at the Single Arm Dumbbell Overhead Carry. Not only does the Single Arm Dumbbell Overhead Carry give an individual an opportunity to build endurance in a similar overhead reach as they would use in the freestyle swimming stroke, but the isometric nature of the movement will also allow one to focus on the positioning of their shoulder blade throughout the carry. It is this positioning of the shoulder blade that is the key to a safe and efficient overhead pattern. (Shoulder pain during swimming? It could actually have more to do with your shoulder blade positioning than your actual shoulder.) We then carry this directly into its counterpart by way of the Single Arm Cable Lat Pulldown. 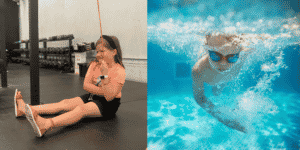 Similarly, to how the Single Arm Overhead Carry mimics the overhead reach of swimming, the Single Arm Lat Pulldown will use the same muscles needed pull your arm back down towards your body while swimming. And, as you may have guessed, also allow you to focus on exactly what your shoulder blade is doing during that pull. We then shift down to the lower body portion of the stroke, i.e. the kick. 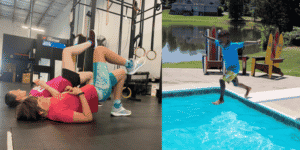 While a freestyle swimming stroke calls for a straight legged kick, it also needs strong glutes and hamstrings to support the work that your hips will do during that kick, which makes a Single Leg Glute Bridge a great option for preparing those muscles for the job. The Single Leg Glute Bridge similarly to the Single Arm Overhead Carry, is an isometric hold, allowing for a focus on technique, as well as building endurance for your glutes and hamstrings. It can also help to prepare the body when jumping. But all the work we have gone over would be pointless if we did not also, focus on your core, as it is where all movement truly begins. 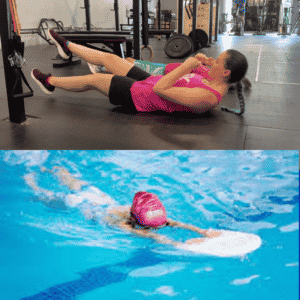 For the skill of swimming Flutter Kicks have some of the best carry over possible, as it requires you to hold the same overall body position you will need in the water, while also getting some practice with the kick you will be using.

Ultimately, even though none of us will be competing for an Olympic medal anytime soon, we can all benefit from healthier overall movement patterns, which in turn allow us to maximize our leisure activities. Whether that means keeping pace with the kiddos, or being sure the kiddos are set up for success in the long run, safe and efficient movement, plus strength, equals longevity.

Need specific help with swim lessons? Check out our friends over at Goldfish Swim School!