Chad Butler was used to being fit and healthy. A former college wrestler, the 38-year-old became heavily involved in competing in obstacle races in his 30s. That is until he found himself with a serious back injury in 2017. It started as a herniated disc and ended in a major spinal cord injury that led to emergency surgery.

“I lost everything and was a paraplegic for a month. They thought I’d get feeling back because I was healthy, but there were no guarantees,” Butler said.

To recover, Butler started working with a physical therapist and was able to move from a wheelchair to crutches and eventually to a cane. Physiotherapy, however, was seriously expensive and he only had so much insurance to cover it.

“It was US $220 an hour and I needed three days a week and that wasn’t sustainable,” Butler said.

Still unable to walk without a cane, Butler decided to hire OPEX coach Dennis Cheatum at OPEX Franklin in Tennessee in August 2018.

The first thing Cheatum did was connect with Butler’s physiotherapist to find out exactly what was going on.

“Dennis literally did a clinical handoff with my physical therapist, so by the time he designed my program he knew exactly where I was physically, spiritually, emotionally, intellectually. All of that was taken into account,” Butler said. “Then he put together a program for me, and there are still constant touchpoints between him and my physical therapist.”

Butler continues to meet his physical therapist on a quarterly basis, and on a weekly basis, he puts his trust in Cheatum’s knowledge. It is working out better than Butler could have ever imagined.

“Last July I was still walking with a cane. …But I have been evolving every day. First I just wanted to be able to stabilize and balance standing up so I could walk (on my own),” he said. Now he believes getting back to running and obstacle racing is a legitimate possibility.

Once he could walk without assistance, Cheatum started adding slightly more challenging work into Butler’s program, like a ski erg and biking in order to rebuild an aerobic foundation. 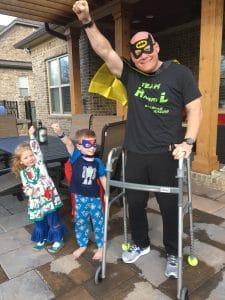 “I’ve also started doing some core dynamic work again recently. When I first started, it was mostly static work, and you know, turning on muscles and making sure there’s a mind-body connection, but now I can do a bit more dynamic movements and have been getting into things like a trap bar deadlifts mixed with the AirBike, or stepping up onto a 13-inch step.”

As a result of his physical progress, his mental state is completely different than 10 months ago.

“I can’t even put a number on it. It has been a 180-degree change. Working with Dennis has helped me improve my quality of lifetimes 100. I can camp with my family now and push my kids on the swings or stand at a cocktail-type setting at a work (function),” said Butler, who works in software sales.

More recently, he played in a golf tournament and was able to stand and drink a beer and listen to music with friends afterward.

“It seems like a small thing, but those are the things I couldn’t do when I couldn’t stand or didn’t have the mobility or strength,” he said.

Butler credits Dennis’ guidance with helping him get through the hardest injury of his life and get to a place where he feels like he can once again live a normal life.

“I always understood what hard work was, but never understood smart, hard work,” Butler said, adding that before his injury he just took for granted what this body could do. “But learning to walk again at 38 years old kind of resets your priorities, and having someone program for me who understands who I am has been amazing.”

Butler added: “This just can’t happen in a group setting. Orange Theory, CrossFit, Lifetime fitness, I’ve tried them all. …They don’t take your individuality into account. So that’s the biggest difference working with Dennis. He knows me, and he has helped me break it down one bite at a time. I really think that’s unlike anything else you’re ever going to find (in the fitness industry).”