“I started in May 2017. I wanted to become more active and healthier. I was pretty stagnant with my desk job and lifestyle and didn’t like the way I looked or felt. I had tried working out on my own before, but I always fell off the wagon. Either my motivation slipped or I got bored doing the same thing and not seeing results. It’s all changed 180 degrees since then.”

David worked on a program designed by his professional coach to fit his needs and his schedule. He gained strength in the gym by working out 3 days a week but wasn’t seeing much change in his body composition. In March 2018, David decided he was ready to make some simple lifestyle changes, and the results have been incredible! He started by making small changes, like increasing the amount of water he drank each day. Over the next few months, it was natural to reduce the amount of soda and energy drinks he was consuming since his water intake had increased, a thought that seemed impossible at the beginning of his fitness journey.

At this time, bread and carbs, in general, were still at the center of his world though, so his next step was to simply reduce the amount of those items during his workweek. He started with replacing a couple of meals each week with a Paleo Works meal. This allowed him to reduce the number of meals he was eating out, which ultimately led to his goal of reducing his carbs from the large amount he had been eating, replacing those calories with good sources of fat and protein. With these simple changes he made outside the gym, combined with the hard work he was doing inside the gym, he has seen a steady reduction in body fat. In September 2018, David was able to reach a milestone of “being in the 100’s” for total body weight. This is quite an impressive feat, as he was as high as 240 pounds in February 2018 (not shown on InBody scan results sheet below). While those results are exciting, and he still has more he wants to accomplish, the impact the last year has had on his life is invaluable.

“I’m more motivated than ever to keep up with my workouts. I feel more energetic in my daily life. I don’t rely on drinks to give me energy anymore. I feel better about the way I look. I’m more self-confident in all aspects of my life. I also feel healthier. My diet has improved significantly and my body feels better than ever. It’s been a self-perpetuating thing for me. The more I put into my programming the more I get out of it.”

We decided to do a “Year in Review” of David for 2018, and the results were staggering!

He set out to work in 2018 on some goals for a healthier version of himself. I would say it was a successful year👊🏼. 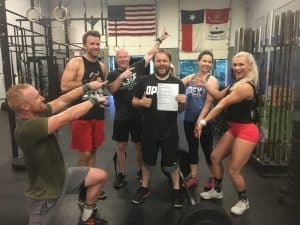 David was able to do all of this in just one year with a lot of consistency, and some guidance from a professional coach. And…his journey has just begun! 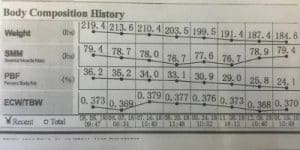 A personalized fitness program, the accountability that can only come from having your own coach who is invested in your long term results, all within a supportive community who celebrates your wins with you. For YOUR optimum fitness experience, schedule a FREE consult today!