Dawn was first a member of our gym years ago when we offered group classes, but when she started to battle a number of rare issues in her ankles which led to many surgeries and eventually an ankle replacement, the group classes could not provide her with the individualized support she now needed.

Dawn is also a long time area swim coach renowned for her commitment to her swimmers as well as the results the swimmers under her leadership are able to obtain. The years she spent dealing with ankles that just wouldn’t heal correctly not only took her out of her active lifestyle but also upset her once healthy lifestyle practices, a scenario that is all too common among so many of the individuals that seek us for professional help with their fitness and nourishment.

After finally making the decision to have an ankle replacement, she was ready to return to being the woman she and her friends knew her to be…but things had changed now. Her body had spent the last few years under the extreme stress of being in and out of hospitals for multiple surgeries with rounds and rounds of antibiotics and other drugs to help her body heal. She was also undergoing hormonal changes associated with menopause. The body she was now living in was not the same body as she had known prior to her surgeries.

Dawn diligently tried many of the diets and methods out there that promise quick results, but they just weren’t working. (And if you know Dawn, you know it was NOT because of lack of discipline or effort. She gives forth the same level of commitment in her endeavors as she expects from her own swimmers.)

She had heard of our move to a personalized fitness program to better serve our members and decided to reach back out to us. Since then, she and her coach have been working hard to once again align all the areas in her life to support her health and fitness goals.

When originally writing this post, she was in the middle of her meet season, which means long weekends on the pool deck, coaching her swimmers to success.

This also means high levels of stress, poor opportunity for routine, and an even worse scenario for proper nourishment. Dawn felt a little helpless when going into this weekend, especially from a food perspective. The food provided for the coaches at the meets are not foods that will serve her well. 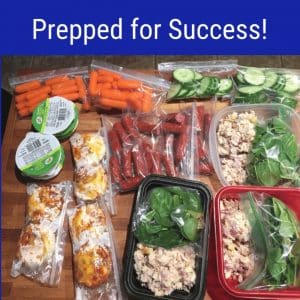 So we made a plan.

And Dawn executed that plan beautifully.

We talked about meals and snacks she could easily prepare ahead of time that traveled well and would last 3 days in a cooler.

We talked of strategies when entering that ever-so-tempting room full of the “food” provided for the coaches. Dawn went into the weekend with not only plans to ensure the success for her swimmers but for the success of her own health as well.

This was just one small step in Dawn’s journey, but a very important one, as it shows that she can be in control of her nourishment even on crazy weekends like this one. Once she experiences the sustainable energy she will feel on the pool deck, notices the absence of bloating in her stomach, and realizes how good it feels to not be bogged down by poor food options…both physically AND mentally, this will become the new norm for her. It will not be a chore for her to prep her food, but a non-negotiable.

And…the intangibles…the best part of coaching in any arena. Just think of the ripple effect this could have on her swimmers and even the parents of her swimmers. They already look up to her for being such a positive force in their lives, so they are watching. They too will notice the change in energy, the change in mood, and eventually the long term changes she will experience, which will allow Coach Dawn to have the discussion of properly fueling THEIR performance with REAL food, just as she has hers.

Check out that smile! This is the pic that sent her coach along with these words:

“I crawled through a long tunnel chasing my grandson and then went down this long enclosed tunnel with him. I would not have been able to do this a year ago!”

Did you catch that?!?! GRANDSON! That’s right, Dawn is a proud Grammy and feels so blessed to be able to participate in his childhood to the fullest.

Dawn is Living a Larger Life!